There are a great many trading strategies, each of them has advantages and disadvantages, but none of them provides a 100% guarantee of profit. Trading on a grid of orders is a reasonable compromise between high profits and high risks. In addition, you can change the ratio of potential profitability to risks using trading model parameters.


IMPORTANT!!! None of the trading strategies gives a 100% guarantee of profit. If you are not sure or do not understand the principles of exchange trading, refrain from using this strategy and the GridBot trading bot. The GridBot developers are not responsible for losses or lost profits due to any reasons (user actions, program errors, exchange errors, actions of third parties).


A distinctive feature of grid trading when using the GridBot is the low involvement of the trader in the trading process, so it can be a good additional income without distraction from the main activity (work). In fact, the trader only needs to determine the moment of entry, set up the bot and run it. Subsequently, it is recommended to periodically monitor the bots for performance, finding the rate within the grid, the need for manual adjustments.

The basic principle of the grid trading strategy is simple: sell more expensive than you buy or buy cheaper than you sell.

In this case the profit is formed only from a couple of trades: 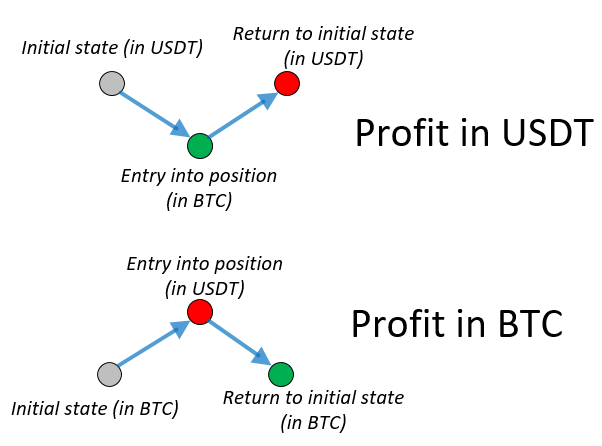 Let's consider the case where we only have start-up capital in USDT. We can:

Next, we will consider a bidirectional grid of orders.

The grid line is the range of prices at which the buying and selling takes place. Each grid line is characterized by the following parameters:

The grid lines are labeled as follows:

The grid of orders

The grid of orders is a set of grid lines.

It is important to understand that the width of the step should be greater than double the size of the fee, because 2 trades are required to make a profit, and the exchange fee will be paid on each of them. 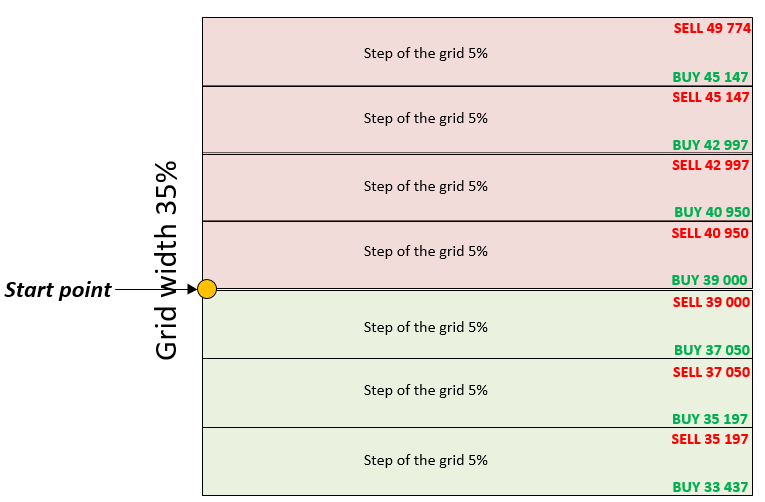 The grid may not be full coverage, but it may be gaps.

Let's consider a fragment of the BTC/USDT rate chart. Suppose we are at the starting point: 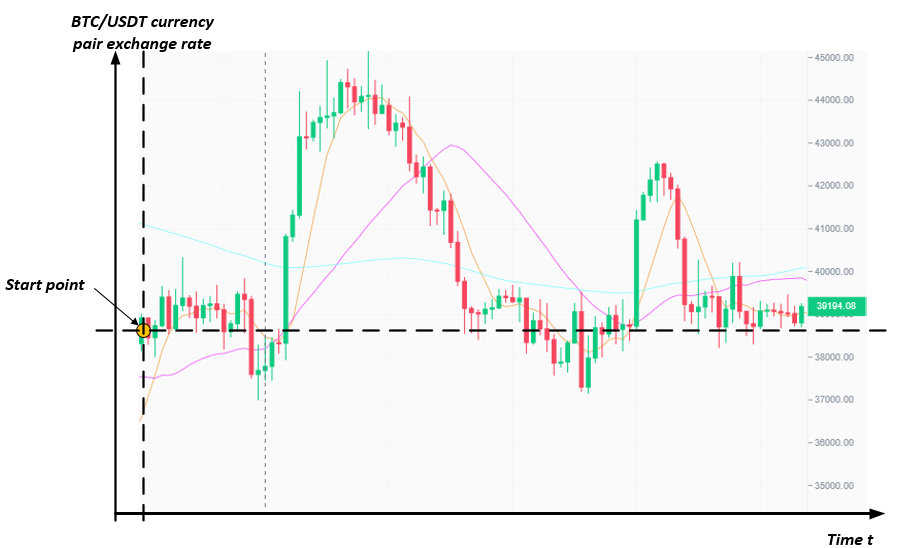 From this point, we will build a grid of orders up and down. It is important to understand that, being at this point in time, we do not know how the currency rate will behave in the future, and the chart in the example is given for demonstration of the strategy's mechanics.

Suppose we have amounts in two currencies in USDT and in BTC, then:

Then the grid on the graph will look like this:

Let's simulate the rate change over time according to the above chart in order to determine the points where the trades will be registered. The dotted line shows the moment of time for which the actual trades are displayed.

Trades are formed at the points of intersection of grid lines and rate candlesticks, if it corresponds to the order (SELL or BUY) 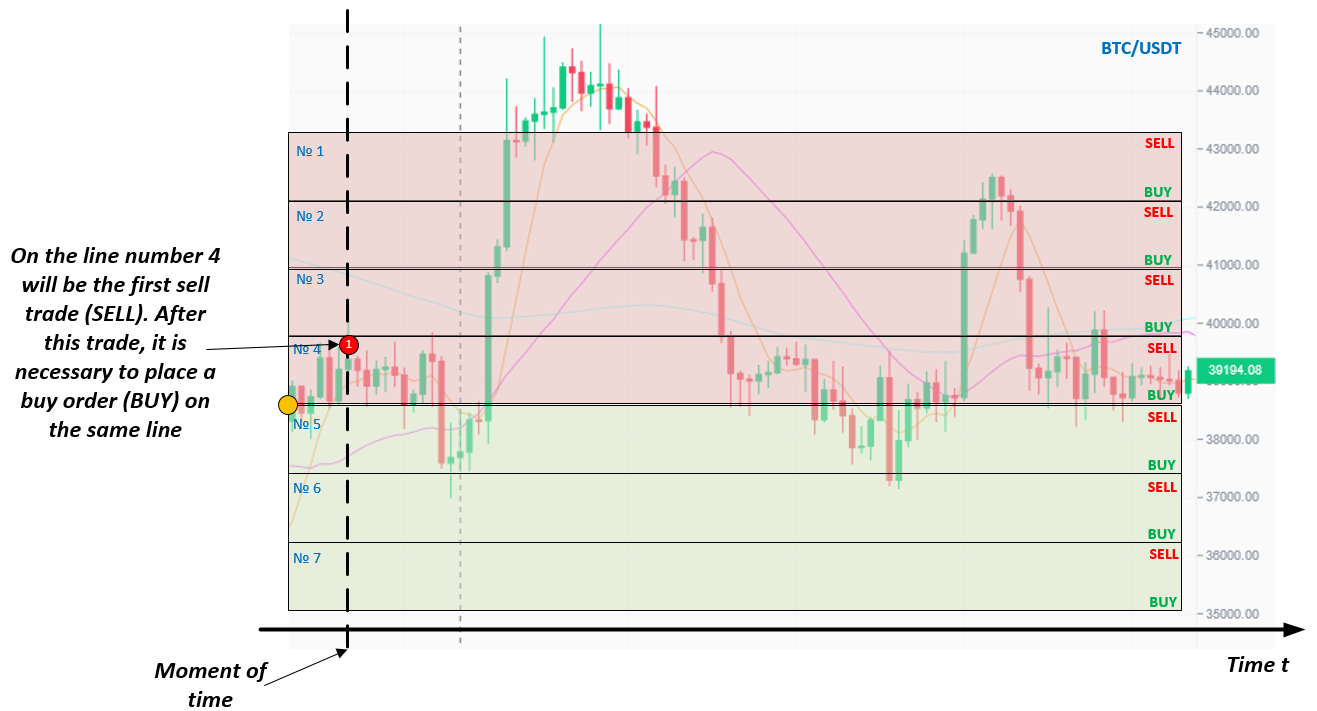 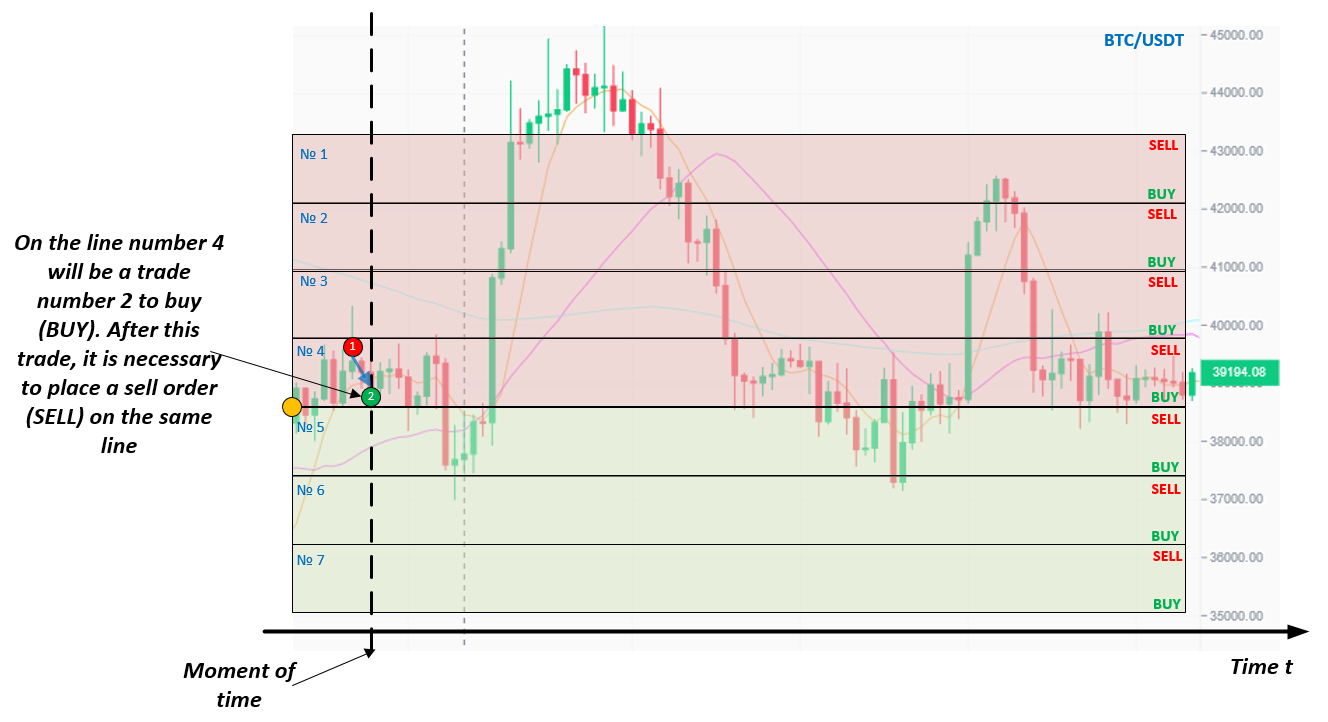 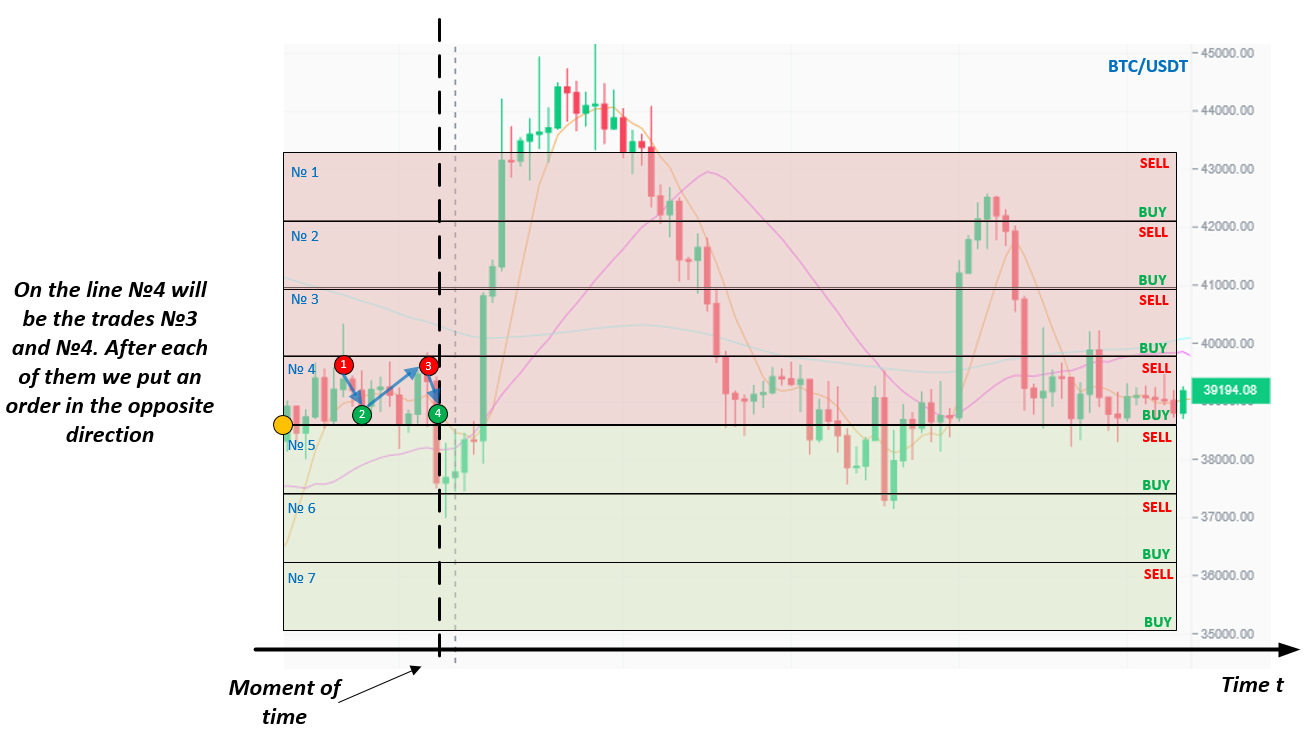 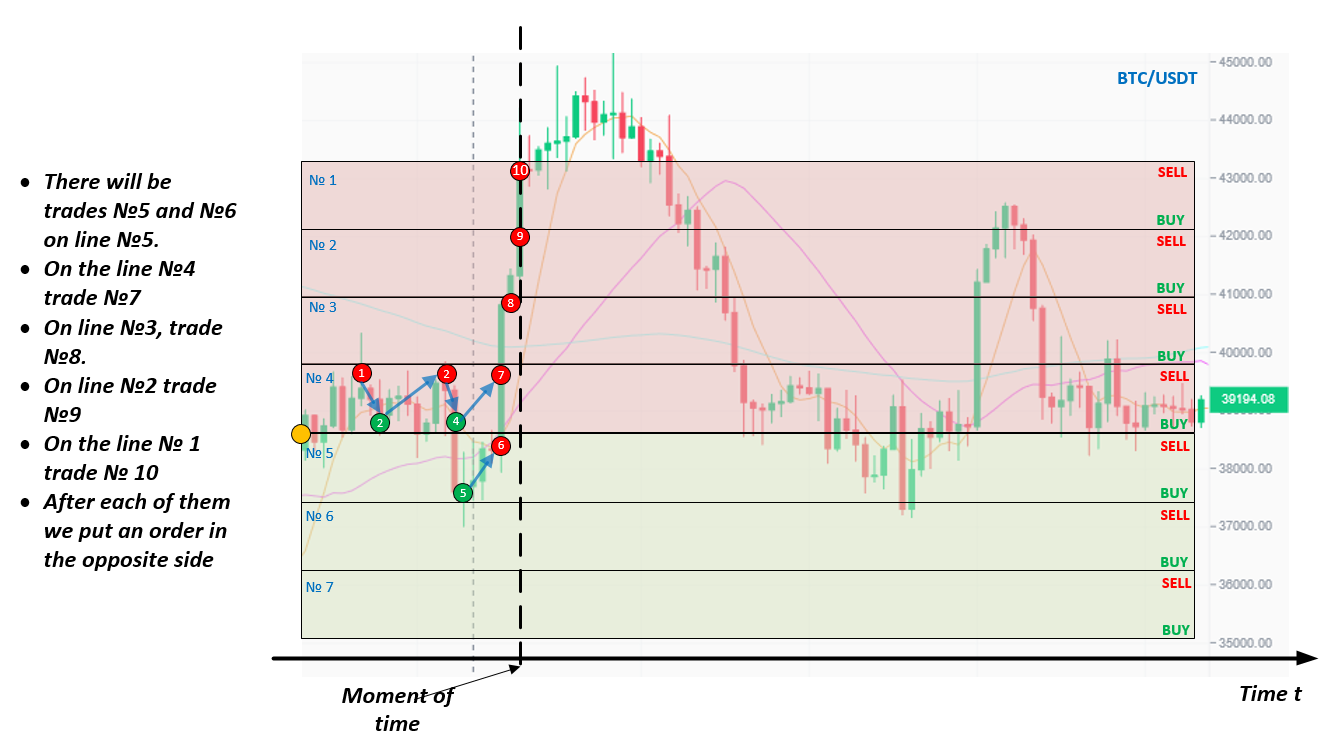 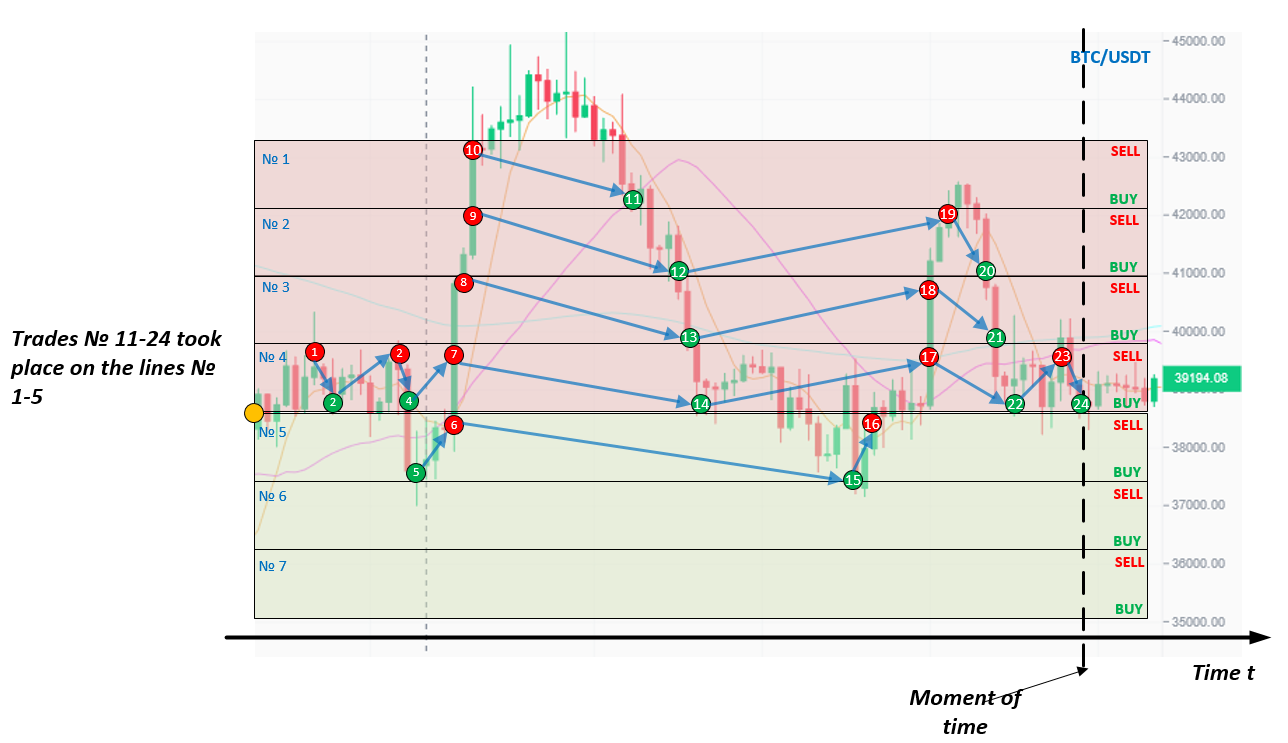 Thus, continues until the decision is made to stop trading on this trading symbol. As you can see, each line works independently of the neighboring ones and the number of paired trades, and accordingly the profitability of each line will be different.

The grid can be characterized by the following parameters:

It is important to understand that the Number of steps is related to the volume of the step, because the entire starting capital must be divided by the number of steps to cover the grid.

In addition, the step size of the grid must take into account the trading fee of the exchange and be greater than the double fee (you need to buy and sell - two trades, respectively will be paid double fee). For example, if the commission is 0.2%, then the step must be greater than 0.4%.

The step size also affects the number of trades - the smaller is the grid step, the more trades will be performed on it, but each of them will be less profitable.

The volume of each row of the grid directly affects the profitability and it can be determined in different ways. Here are the most common variants:

State of the trade grid

In general, it is important to distinguish between two states of the trading grid:

The strategy can follow different priorities, for example, always aiming to get the grid back into working condition by investing extra free money in grid expansion. An alternative is to wait for the grid to return to a working state from a rate change, but in this case, there will be no increase in the working capacity of the grid during the entire waiting period.

At the beginning of trading it is necessary to understand how the problem of the grid going out of order, which will happen to any grid sooner or later, will be solved. If the expansion of the grid is planned, it is necessary to provide for the reserve funds for new orders. The reserve funds do not participate in trading and do not generate profits in any way, so you should be careful with the size of the reserves and how it is distributed. In general, we can recommend the following approaches:


Modification of the trading grid

In life, it is often necessary to replenish the exchange balance with the released funds. It is also possible to divide them by different methods (evenly, up the grid, down the grid, strengthen the weakest lines, strengthen the most active lines according to statistics and others).

It is also allowed to gradually expand/decrease the grid over time. Such an adaptive trading grid will bring more income, because more funds will be involved in trading. In any case it is always a balance between risk and profitability.

Extreme (degenerate) grid variants are possible, for example, from one line - there will be maximal capital capacity on the line, but this capital will not work in case the rate leaves its limits.

There is an approach of gradual filling of the trading grid, which does not exclude the construction of a "gap" grid, when there are gaps with non-working lines. It is justified, when the rate changes strongly and remains at a new level for a long time. This approach allows you to return the grid to the working condition without taking losses.

We recommend to pay attention to the approach of gradual filling of the trading grid from the very beginning, when not all funds are invested in the grid, but, for example, half of them. When the grid is out of working condition, use the remaining funds to return the grid to working condition.

When formulating a trading strategy, it is important to understand when to evaluate trading results and take profit. The chosen parameters of the trading grid and the trader's actions depend on it. Each trader chooses this parameter for himself. The target currency is also important (increase USDT or BTC) - this affects the evaluation of profitability at a particular moment in time. Of course, it is necessary to exit the trade at the moment of an acceptable rate of the target currency.

The exit can be full or partial.  The full exit consists in cancellation of all active orders. The partial exit can be various:

To take profits, GridBot has a special tool "Grid cut", which can be used to cut the percentage of profit or the entire current capacity or the starting capacity of the grid line.